Frank William Reed was a wealthy local industrialist, and one day he and his good friend JW Dudley were amusing themselves by hitting golf balls on a piece of land known as Wilcock Eye, down by the river. So taken were Reed and Dudley with their surroundings, that they devised a plan to turn the beautiful vale into the area’s premier golf course.

By early 1912, the purchase of South Cliffe, an imposing manor house overlooking the vale and the lease of over 100 acres of prime farm land to be the course, made the dream possible. By April 1912, Reddish Vale Golf Club was formed. In an inspired move, it was decided to ask the then Captain of Alwoodley Golf Club in Leeds, Dr Alister MacKenzie to inspect the land and to advise on the design of the proposed course. 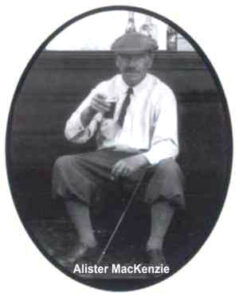 Dr Alister MacKenzie was a Yorkshireman of Scottish descent, who attended Cambridge University where he trained as a medical doctor, and then surgeon. During his wartime service in The Boer War, MacKenzie became interested in camouflage. As a result, during World War I, when he once again served in the military, he worked not as a surgeon but as a camoufleur. MacKenzie had learnt how things blend most easily into their natural surroundings such as the landscape, the art of deception, and attributed the brilliant successes of The Boers to this skill alone. MacKenzie also had a great love for the game of golf, and after WW1 left medicine entirely to concentrate on another passion in his life, golf course design.

MacKenzie would go on to be arguably the most celebrated golf course architect of all time, and some of his best known works in the UK are Moortown and Alwoodley in his native Leeds. Others include Augusta National (home of The US Masters), Cypress Point and Crystal Downs in the United States. He even got as far as Australia to design Royal Melbourne, and then back to re-design Lahinch in Ireland in 1927.

MacKenzie not only had an eye for the land, but also a theory for how the strategy of each hole should play. In a nutshell, MacKenzie is admired for producing holes that offer an ideal balance of risk and reward options, and for designing golf courses that challenge yet also accommodate players with a range of skills.

After his first visit to Reddish Vale, MacKenzie wrote expressing his great optimism for what he saw as the ideal basis for a course. He wrote ‘I visited the ground during the wettest part of the winter months, and the whole ground appeared to be exceptionally dry. The ground is agreeably undulating without being too hilly. The proposed Club House is in an ideal situation.’ 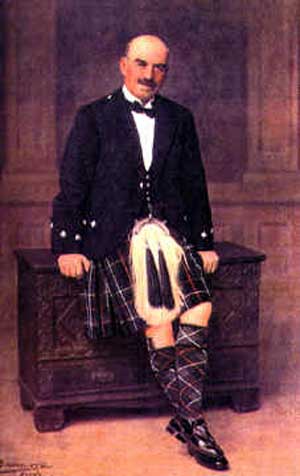 Reddish Vale is the combination of MacKenzie’s magical eye, and 100 acres that are rich in feature and beauty. The course created requires thought and shot placement. While punishing a bad shot or a bad decision, the course gives you a chance and is quirky and fun. MacKenzie can only be considered a genius for how he has used the contours to create a course that feels totally natural in flow and shape, while rich in variety.

The test of time is the biggest test of any golf course. With all the changes in equipment technology over the past 100 years, and with all the ‘expert golf architects’ on the various club committees that have been and gone, the golf course a century on is almost identical. Only the 16th hole has been changed, being extended from par 3 to par 4 in the late 1930’s, and what a hole it is…

Sir Henry Cotton, the Cheshire born three times Open Championship winner was a great admirer of Reddish Vale, and in particular loved the ‘new 16th hole’, the par 4 dog-leg that plays around a bend in the river Tame.

It was after Cotton played a 36 hole exhibition match at Reddish Vale in 1940 (against the current Open Champion at the time Richard Burton) that he wrote a two page article expressing his admiration of Reddish Vale, and in particular the 16th hole. 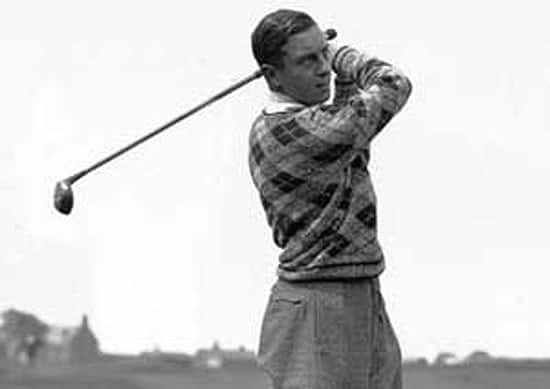 Initially surprised at finding ‘such an interesting and undulating course right in the town’, Henry Cotton went on to describe the 16th hole as ‘the best looking, most fair and at the same time probably the most difficult hole I have ever played’. The 16th is without question a unique hole and Cotton was intrigued, describing it’s appearance as ‘beautiful’, but also commented that for the average player it was ‘frankly too difficult!’ The hole was renamed ‘Cottons’ soon after. Cotton concluded that both the 14th and the 16th holes ‘are worthwhile selling to the golfing public, and any course with two such lovely holes should tell the world’.

Cotton played sublime golf during the match, and his scores of 67 and 66 were enough to defeat Burton 8 and 6. Richard Burton was incidentally the player who held The British Open title the longest. Seven years in fact, as the competition was not played again until after WW2 in 1946.

Not many clubs can claim to have had a former Open Champion as their Professional, but from 1946 until 1949, Alf Perry was the club professional at Reddish Vale.

Perry’s victory was in 1935, while in the post of club professional at Leatherhead golf club in Surrey. He surprised the golfing world that year by taking a few days off and winning The Open Championship at Muirfield. His strong grip, long hitting and right to left flight did the trick as he won by four shots. Perry’s winning total of 283 equalled the lowest in any Open and was not beaten at Muirfield until Jack Nicklaus won there in 1966. The nature of win being so totally unexpected, and his shy, unassuming manner provoked comment for years to come. Henry Longhurst wrote ‘he was last seen sitting alone at Drem railway station, waiting for the train home and with the Claret Jug on his knee’. How times have changed! 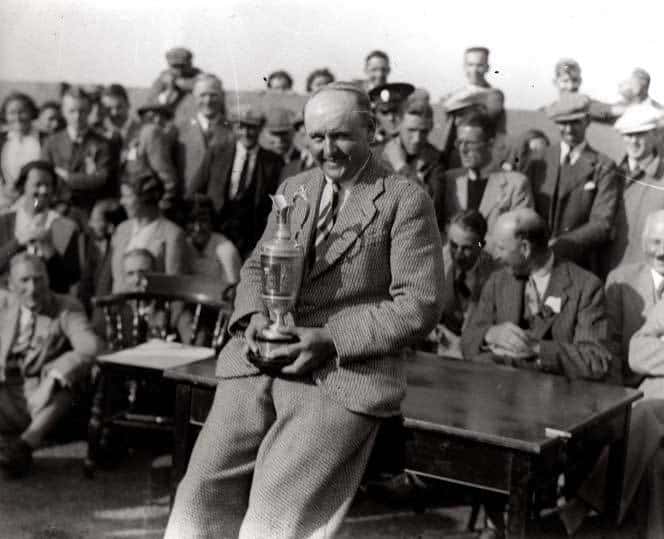 Perry was called up for the Second World War in 1939. On his return in 1945 he discovered that during his absence, his position of Club Professional had been given to someone else!

It is said that he made his feelings known, before choosing the Manchester area and Reddish Vale for his next appointment. Perry remained at Reddish for three years, before returning to Leatherhead where he stayed until his retirement in 1972.

The Reddish Vale course continues to entertain golfers of all levels of ability, as it has for the previous 100 years. The club has produced some very notable players in recent years, such as Barry Barker and Adam Stott who have played and represented their club at both county and national level. Reddish continues to host county events, the most recent of which was The Cheshire Seniors Championship in 2012. Reddish also hosted The Balfour Cup in 2012, one of the oldest golf competitions in the north-west, the trophy first played for in 1897 is a Victorian masterpiece. 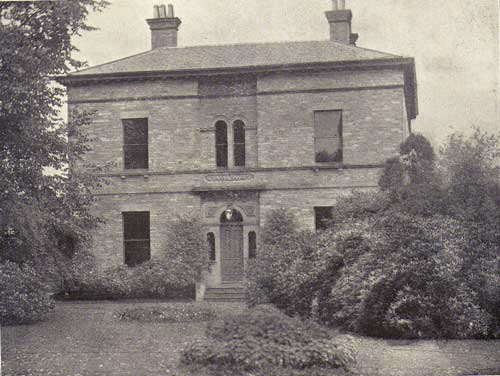 The Centenary year has provided an opportunity for the present members to celebrate the greatness of the club, and the role that Reddish Vale has played in bringing people together for fun and happy times over a whole century.

Reddish Vale has a proud history, and we are keen to maintain the traditions and standards set by those before us, while we also embrace the new technology needed to keep moving forward.

The course record was set by homegrown Adam Stott on 23rd August 2017.

Having previously turning professional Adam returned to Amateur status at the club, playing off a handicap of Plus 2.

He continuously bettered his handicap in competitions, advancing him to Plus 4, when he set this score of 8 under par for the course it dropped his handicap down to an amazing Plus 5 handicap, one of the lowest in the country at that time, a remarkable feat .